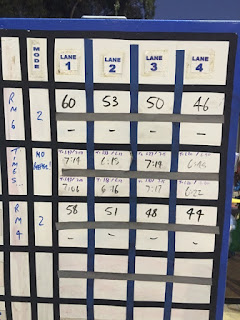 5.30am crew' times
Dear Swimmers
Congratulations to all of you whom have swum this week's CSS session (the one with the 400 / 500m timed swim in the middle) - I hope you enjoyed it?! Some very commendable performances across the board.
What's great to see with this type of session is because it's NOT a formal time trial, people seem to just do it without the stress that is often associated with a proper time trial. Time trials are OK (we've done a lot of them in the past), however, gradually over the last 12-18 months we've been moving more towards the idea of testing more frequently in the sessions without you often really being aware of it!! Operating like this desensitises you a tad to the stress of a time trial and allows me to more regularly keep an eye on your progress. It also means we don't "waste" a hard training session with a much lower load time trial session, which, if you're only swimming 1 or 2 times per week for example, can be detrimental in the long term.
There is a saying: "training is testing and testing is training" which perfectly sums up this approach I believe
It is what spurred us to then build the new CSS Tweaker (see http://www.feelforthewater.com/2016/04/an-introduction-to-css-tweaking-future.html ) aspect of the new Swim Smooth Guru (www.swimsmooth.guru) which this week has been getting some rave reviews! It's essentially what I instinctively do with you each session as I adjust the tempo trainers up and down according to how you've been performing. Now with the tweak of a button, so too can other swimmers around the world more intuitively tweak their own paces. It's pretty cool!

The Virtual Squad
One of the points we're going to be talking about on tonight's blog (www.feelforthewater.com) is how using the power of the Guru, we plan to share our best 1 to 2 sessions per week with the wider swimming community from the squad sessions here in Perth. We're calling this feature "The Virtual Squad" and it will allow people from all corners of the world to tap into what we do day-2-day here in Perth and join the growing Swim Smooth community. From time to time you'll see me wearing these "funky" HD video glasses (I've been trialling them this week) which allow me to film short snippets of the sessions without interrupting my coaching to compile as a short video diary to complement the video introduction that I film later on in the day once you've all left the pool. We are hoping that this allows an immersive feel for those tuning in and equally provides a little fun and entertainment for you to pass on your stories of how much it hurt or what you really liked etc as you often do with the other squad members! By all means just say "no" if I ever ask you for a quick snippet on how you felt etc but I'm hoping you'll find it quite fun! Equally, if you're ever away from the squad and want to "catch up" on a session you missed, you'll be able to do that now within the Guru. For those of you who work FIFO, this should allow you to maintain your pace and fitness much better than in the past.
As ever, I'm keen to hear your feedback on these initiatives - so fire away!
Have a great weekend,
Paul 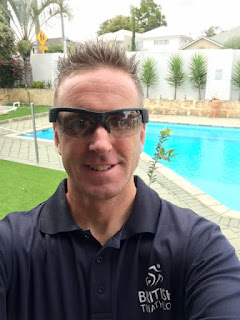