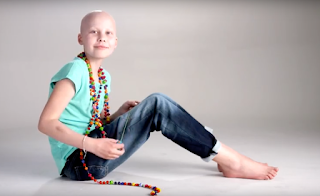 Dear Swimmers
I am writing to inform you that I'll be absent from my squad coaching duties from Friday 10th June until Thursday 23rd June (inclusive, returning to pool deck on Friday 24th June), but for a very good cause indeed. You can read on for that reason if you're keen to know a little more about the weird and wacky stuff I'll be doing whilst I'm away, or just finish now and know that I'll be away for that period - I can't guarantee this is a short email, but hope you enjoy!
Meeting great people, doing great things:
One of the biggest privileges I have with my crazy life of being able to whip around the world teaching swimmers how to improve their swimming and coaches how to improve the way they coach, is that I get to meet some very special people along the way; people I become close to and get to know much more about them and their families than a simple exchange on pool deck allows me.
In March 2015, one of the three Swedish swim coaches we invited on our 3-day Coach Education Courses in the UK was a guy named Matti. We clicked instantly and at this point Matti was hopeful of ditching his career in IT for the pursuit of becoming one of Sweden's first Swim Smooth Coaches. Sadly, life for Matti took a very sad twist when on the 28th September 2015, his 8 year old daughter, Stina, was diagnosed with Acute Lymphoblastic Leukaemia (ALL). The news understandably devastated the family and given that my new friend's daughter was only 12 months older than our own son Jackson, the reality of how lucky we are to have our health and - even more so - the health of our children, really hit home.
You can read more about Stina's journey at http://hejastina.se/about-stina-and-leukaemia/ which has seen her be subject to intense chemotherapy which has resulted in no less than five brain strokes and coma when her body rejected the treatment. It's been simply awful, but Stina is a tough little cookie and has been pulling through! As of 20 days ago, Stina is responding very well to the treatment now and doctors are confident of her recovery.
During this period Stina and her family have been making special bead necklaces to raise awareness of the condition and Swedish rap sensation "Petter" even got together with the family to produce this video:
https://www.youtube.com/watch?v=ruk6BhM9mhQ
Swimming Smooth for Stina:
Back on the 4th December I remember messaging Matti with a proposal which I at first thought as being "inappropriate" but surprisingly was met with great positivity.
Apart from being known for it's furniture behemoth, IKEA, it's meat balls and also those crazy chefs from the Muppets, Sweden has been home now for the last 10 years to one of the hardest and most crazy sports developing on the planet, "SwimRun". This is a far cry from the aquathlon events that usually tag onto triathlon events around the world where the world championships see athletes perform a 1500m swim followed by a 10km swim - that's a piece of cake compared to the ÖTILLÖ (http://otilloswimrun.com) which is a beast of an event that sees athletes working with a partner to cover 65km of terrain including 10km of swimming and 55km of hardcore trail running over mountains and crazy stuff like that! The thing is, you don't just swim the distance, have a nice cosy transition and then do the run, oh no, these Swedes are crazy! You literally swim between islands, run over the top of them, swim to the next island, run over the top of that etc etc!
All up, these events usually comprise about 13 swims and 13 run sections as a continuous race. What's more, you have to carry everything you start with around the entire course! So yes, that means running in your wetsuit and swimming in your trainers all whilst tethered by a 2m rope to your mate!
It's insanely hard! I'm a previous British Universities national aquathlon (and triathlon champion), I've swum the English Channel in the worst conditions of the 2011 season (28-35 knot head winds), I've swum - and won - the world's longest marathon swim, a circumnavigation of Manhattan Island in New York (a total of 46km of just swimming), but this thing's got me spooked, believe me! Spooked, but equally intrigued at the same time…
…intrigued enough that when the first official ÖTILLÖ World Series event outside of it's home of Sweden was announced on the gorgeous Isles of Scilly (off the south-west coast of Cornwall in the UK and amidst the oft-brutality of the Atlantic Ocean), I thought "what the heck!" let's do this and lets do it to support and raise money for Stina's treatment and that of the Childhood Cancer International Foundation (http://www.childhoodcancerinternational.org)!
So I got on the Facebook messaging service to Matti, and tentatively asked him if he'd be keen to be my partner. Matti has previously done the Swedish version and is very experienced with this type of event (see https://www.youtube.com/watch?time_continue=32&v=z317rjs0gxw - yes, that's ice he's climbing out of!!), but given the situation with Stina's health, I was more expecting him to say no, than yes. Despite the race date also being his wedding anniversary on the 18th June (and my wife Michelle's birthday on the 19th June), Matti and his family were excited for him to have something positive to aim towards, and gave him the full tick of approval.
Now I was in trouble! I'd have to learn to run all over again. My last run-type of event was the Singapore 70.3 Ironman in 2007 and I reckon if I've run 10km in total since that time, I'd be lucky! Whilst I know we aren't going to be out there doing this thing for the win (or even to qualify for the World Championships later this year in Sweden), I did have to start my run training in earnest and learn how to wear silly things like this: 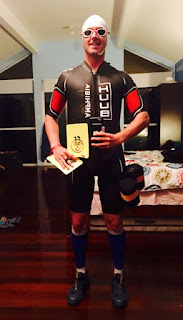 Anything goes (so long as you can carry it!): wetsuit, trail running shoes, compression calf guards, pull buoy, paddles, cap and googles - if you've never tried swimming with your shoes on you should, it's a blast (not!), it's a good 10s/100m slower believe it or not, even with the buoyancy of the wetsuit and pull bouy (here's some stats: (www.worldofswimrun.com - see "The Perfect SwimRun Shoe 2016"))
So my run training picked up and I even managed a win in the local Lake Claremont 10k fun run a few weeks ago (Mo Farrah was a notable absence it has to be said though!). I've got my swimming back on track and am loving this crazy sport! There's something really weird but nature-engrossing being able to swiftly convert from a land-based mammal to a marine fish - I'm like aquaman! A truly amphibious beast! I had a 20km session (5km swimming and 15km of running) last night as the sun went down along the banks of the Swan River and got to see a side of Perth very few witness from the rugged shoreline along Dalkeith. It was wonderful! Maybe you even saw the weirdo in his wetsuit prancing along by JoJos restaurant in Nedlands?! Apparently it's not just me who finds this bizarre fascination with the sport, there's a whole webpage dedicated to the "lifestyle" surrounding it: http://otilloswimrun.com/swimrun-life/
Here's the course we'll be navigating (http://otilloswimrun.com/races/isles-of-scilly/) on June 18th (or maybe the 19th if the weather turns foul): 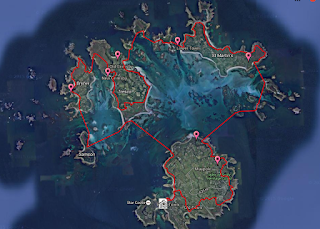 The route, 42km, comprising 32km of trail running (in a wetsuit!) and 10km of ocean swimming (in your trainers!) You can see the actual breakdown here: http://otilloswimrun.com/wp-content/files/OTILLO-Swimrun-IslesOfScilly-2016-TimesAndDistances.pdf 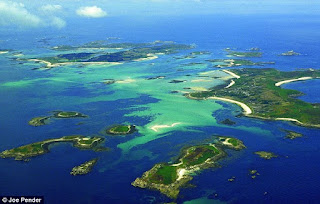 Gorgeous - the Isles of Scilly - a lot like Rotto (but a tad colder!)
There's still a chance that Matti might have to pull out even as close as 6 days before the event (the date of Stina's next bone marrow test), but if that's the case Bjarne Koning (who many of you in the 9.30am crew met in January) will become my partner and we'll still race under the same team name with the same purpose. Worryingly Bjarne finished 15th out of 300 in yesterday's Swedish qualifier so whilst I had the measure of him on a >38ºC run through Bold Park in January, I dare say he'll take me to the cleaners on the actual race if that's how it eventuates!
Please donate:
If you feel you can help us with rising money for Stina, they are 70% of the way through their target and donations can be made here: https://www.barncancerfonden.se/1309393292/  (if your Swedish is not what it once was, follow this short video clip here: https://www.youtube.com/watch?v=BmtmYN0Ge7w&feature=youtu.be&ab_channel=MattiTordsson)
Thanks everyone - here's to a great day on the Scilly Isles then!
Paul
Posted by Paul at 12:32 PM