Just a quick reminder that due to many of the squad (including the coaches!) competing at the Rottnest Swim Thru on Saturday afternoon, there will be no 1pm squad session at Claremont pool this week. Sessions will resume from next week as normal.

Hope to see you over at Rotto!

Paul
Posted by Paul at 6:49 AM No comments: Links to this post

Dear Swimmers
Due to my participation (on the boat I might add!) with Aaron's midnight Channel Swim tonight, tomorrow's 1pm session will not be down at Claremont Jetty as previously advertised, but will be down at the Claremont Pool as normal. Sorry for any disappointment - hope to see you then and hope to not be too dreary after no sleep!
Cheers
Paul

Posted by Paul at 4:25 PM No comments: Links to this post

Show your support for Aaron's swim by attending the BREASTFAST OF CHAMPIONS with all proceeds going to Breast Cancer Care WA!
On Friday, November 23rd at midnight, Aaron Richardson will set off into the dark waters of the Rottnest Channel and swim solo the 20km to Cottesloe Beach, arriving around 7:30am Saturday morning. I'll be assisting Aaron as his swimming coach - it's going to be a great night!
Aaron is doing the swim to honour his triathlon coach, mentor and close friend Sam Naudin who lost her long battle with breast cancer in January this year. Her courage and kind giving nature has inspired Aaron to take on this brave challenge in order to raise $30,000 for Breast Cancer Care WA.
Watch the video for more info @ www.youtube.com/watch?v=br8zxuoPopI
Join us in supporting Aaron and his cause by attending the BREASTFAST OF CHAMPIONS where we will welcome him on completion of the massive swim. The breakfast will be hosted at the Cottesloe Surf Life Saving Club where there with be loads of entertainment and great prizes up for raffle to raise money.
Tickets are only $40 and include:
• Gourmet Breakfast
• Reverse raffle tickets to win great prizes (stay tuned for items)
• Entertainment - live music, DJ and activities
TICKETS ARE LIMITED SO GET IN QUICK
Purchase TICKETS @ www.breastfastofchampions.eventbrite.com.au or get in touch with one of the hosts. All money raised will go towards Aaron's target of $30,000 for Breast Cancer Care WA!
And if you can't attend the breakfast then show your support my making a DONATION @ www.everydayhero.com.au/breast_in_the_west
Cheers
Paul

Posted by Paul at 5:29 PM No comments: Links to this post

Look after those shoulders of yours this season!

Dear Swimmers
Wow! Those were some nasty stingers last Saturday at City Beach if you did the event and well done to all those of you who survived it! No easy task!
OK, so this week I have two things for you regarding shoulder injury and management following on from Prue Newnham's physio screening last Saturday at Claremont Pool.
Have a great day!
Paul

Posted by Paul at 9:04 PM No comments: Links to this post

Dear Swimmers
Hope you are all doing well and looking forward to a cracking weekend of open water swimming.
First up, I have some fantastic news in that myself, Wayne Morris, Ceinwen Williams, Paul Downie, Andrew Hunt, Geoff Wilson and Lisa Delaurentis have all been selected to compete in the prestigious 28.5 mile (~46km) Manhatten Island Marathon Swim (or "MIMS" for short) on 8th June 2013 which we are just thrilled about. It is a hugely lengthy application process which even involves having to write an essay about why you want to seek selection. We're now just so stoked to have got in and be seven of about only 30 or 40 swimmers worldwide to be selected for the race. The Rottnest Solo swim on 23rd February 2013 will be a very nicely timed lead-up event to this mammoth swim which will see us circumnavigating the entire "Big Apple". For more info see: http://www.nycswim.org/Event/Event.aspx?event_id=2302&from=faq - can't wait!
Secondly, I am personally swimming the 10km event this weekend at City Beach (starting at 8am and hopefully done by about 10.30am) and have just been informed that we can use a paddler for the event to assist with feeding otherwise it'll be quite a lengthy dog-leg into the beach each time to pick up some nutrition after each 2.5km lap. I realise it is very short notice, but if anyone would be keen to assist and help out with paddling (and have their own paddle) I'd love to hear from you!
Cheers and have a great weekend,
Paul

Posted by Paul at 10:15 PM No comments: Links to this post

Finally! The weather seems to be back - wahoo! Can't wait for the City Beach open water swim this weekend (enter at http://www.openwaterswimming.com.au) and the Lake Lesch swim on Sunday (enter at http://maidavalemastersswimming.com/2012/10/14/2012-lake-leschenaultia-swim/)

So, the new Thursday 6.30pm session has been going now for 5 weeks and is specifically focused (as per the Wednesday 9.30am session and the Friday 5.30am and 6.30am sessions) to be a threshold development session, i.e. tough with brilliant pacing!

Unfortunately, due to a clash of bookings which the pool hadn't foreseen, we have been allocated the 25m pool for the next few months up to Rotto for this session...

...now, before you groan and moan and think that it won't work as well, let's extol the benefits of this session and also performing it in the 25m format: 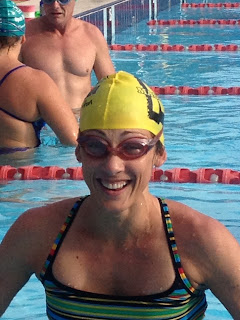 Nicole, building a bridge and "getting over it" with a pair of rose tinted goggles - well done Nicole - you did great today to turn that around!

So, we still have 6 spots available in this squad - open to the first six people to email me back and request a spot...go!

Posted by Paul at 1:26 PM No comments: Links to this post

Dear Swimmers
Just a quick note to say that this Saturday's open water skills session will take place as normal at the Claremont Pool from 1-2pm despite originally advertising an actual open water session down at Claremont Jetty in the Swan River. Unfortunately I haven't yet secured use of some full water safety support and consequently would prefer to keep the session in the pool this week. Sorry for any disappointment this causes.
We shall look to be in the river on Saturday 24th November - watch this space!
Cheers
Paul

Posted by Paul at 7:57 PM No comments: Links to this post