Know Your Reasons: Should You Be Racing For Sheep Stations?

Dear Swimmers
The following blog post is my musings on what motivates us to train and - in some cases - compete. What prompted me to write this was my recent decision to withdraw from the Port-2-Pub 25km Solo swim on the grounds that I couldn't find my reason, something I've never had to deal with before. You may or may not care to know this information or of my life choices, but this is my account of that decision and I hope it helps you in some way.
Whilst this discussion is likely to seem somewhat egocentric, I am hoping that by sharing this open and honest account of the emotions of preparing for a big event, you might indeed be able to solidify your own reason to forge ahead, or, if like me, elect to take a different path and to feel good about that decision in the shortest amount of time possible. Of course, this is likely to apply to many things in your life, not just swimming or the squad!
Knowing our reasons and being positive about them is essential I find to being empowered to pursue a goal; not knowing has the exact opposite effect and that's not a fun place to be.
In preparing this blog, I am reminded of two books that I recently read which are well worth a perusal if you're feeling similar emotions to anything expressed here:
Book 1: 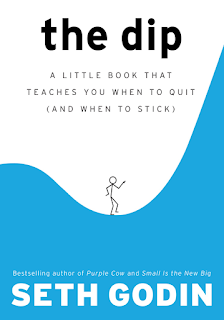 …the subtitle says it all, "when to quit (and when to stick)"
I have spent many hours ruminating over even publishing this post because of: a) being perceived as a quitter (more on that in Book 2 below) and all the negative societal ramifications that usually has; and b) because with exactly one month to go before the Rottnest Channel Swim the last thing you might have expected me to discuss openly was the "Q" word especially when we're innately trained to believe we must never do such a thing. "If you don't quit, you'll make it" is the mantra we are taught to live by at all costs. In talking with several members of the squad though recently, I know that this is very much the point that you are also currently at too - if this serves to help you and you only, then so be it. That'll be a positive outcome for me. Everyone else might not be still reading anyway…! Yawn...
Book 2: 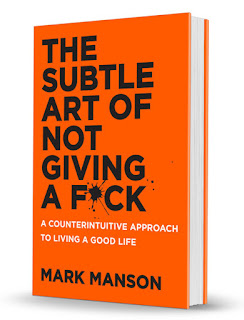 …excuse the profanity in the title!
Essentially this book is all about knowing what to care about and what not - typically what people think of you or what you perceive they do. I think we're all guilty within our peer group and swimming community in general of feeling the peer pressure to perhaps drive forth even if that might not be the best direction for us. Manson teaches us to cut our own path and be happy in our choices and not to worry too much about what people think because at the end of the day, no one really cares but you anyway! Is that an easy way of saying "it's OK to give up and have no drive"? I'm not so sure.
Know Your Reasons: Should You Be Racing For Sheep Stations?
Back in June 2015, you may recall I ran a Q&A for the squad to find out a little more about the demographics of the squad and to also aim to identify what makes you tick. Below is a snapshot of some of that information gleaned from the Google analysis: 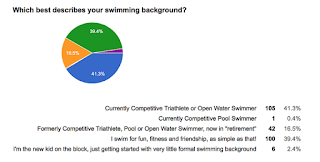 Of all the information we collected, to me this was the most intriguing. I have been coaching the squad at Claremont Pool now for nearly 9 years and Swim Smooth itself has just had it's 12th birthday, and yet my perception of reality was totally warped against what the stats were showing. Even being "behind the scenes" of the whole squad operation, like you, I am susceptible to heresy also.
I often hear on the grapevine such things about the squad as "someone has to die before you can get a place!" and "that's a very serious squad, only for the elite!" and yet this information seemed to suggest otherwise - 39.4% of you in fact claim that you're just swimming for fun, fitness and friendship (as simple as that!), 16.5% of you are no longer competitive and are in "retirement", and a further 2.4% have no swimming background at all.
All up then, 57.3% of you have very little inclination to compete or prepare for a big event, instead you are driven by your own innate sense of motivation to be healthy and to simply share some social time with your mates. And that's OK. Perfectly fine in fact. Just not what I was expecting, and not what the international coaches who arrive this weekend will perceive either when they see our "slower" lanes averaging a good 15-20s per hundred faster than their own squads. In fact lane 1 on Wednesday morning averaged 1:52 for a continuous 1500m swim within a really hard 4km Red Mist set. This is always the visiting coaches's biggest collective comment after they spend two weeks with us - how fast you guys and girls all are and how disciplined and consistent you are in your approach. From an outsider's perspective, it's very much a competitively healthy group of people enjoying each other's company and that makes me very proud as a coach indeed.
I just wish I could learn to be like you guys myself as I've been doing it hard lately, coming to terms with the necessity to withdraw from this year's 25km Port-2-Pub race (more on that later).
I draw amazing inspiration watching you every day, taking instructions, following through, ticking all the boxes, sometimes achieving your goals, sometimes not, but ALWAYS coming back for more. I often question how much I must sound like a broken record on the pool deck repeating instructions, listing familiar drills time and again, but still you come. As Rob from Lane 3 (Friday 6.30am) so eloquently put it:
"So where does the black line lead? Not sure but happy to keep following to find out!" 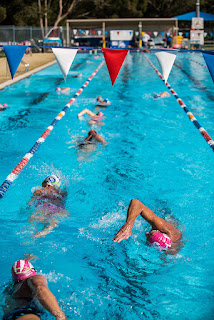 Keep following that black line!
My entire sporting life has been about competition. I was never the best swimmer in our club and certainly not in our county (state), but I always thrived on the competition, trying to beat my own personal bests at every opportunity. I had a dogged determinedness to be the "last to quit" thinking that if I can just outlast my competitor's own internal motivations then ultimately I'd be the only one left and would start to win everything as the competition pool shrank in numbers! 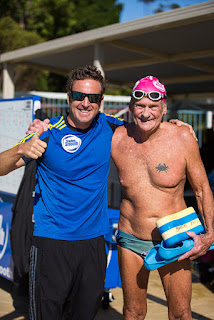