Dear Swimmers
Hope you are all having a fine weekend, albeit rather a chilly one!
2018/19 Fee Structure
Just a quick note to start to inform you that as of 5pm WST on Wednesday 4th July, squad credits will see a small increase in fee structure inline with the pool's increased charges and in line with an increase in CPI. Rather than increase immediately though, we wanted to give you the opportunity to top your account up if needs be at the 2017/18 fees. Anyone doing so will see their expiry starting AFTER they have used their last credit on their current block, so no stress there.
Here are the new fees:

Paul away
I will be away from Friday 6th July and back on pool deck Tuesday 24th July. Michelle has already taken the kids over to Canada to see their grandparents who are celebrating an amazing 50 years of marriage. Being a glutton for the early morning "punishment" of the recent wet and wild weather on pool deck - and wanting to keep cracking the whip and make sure you all stay motivated of course - I decided to follow 2 weeks in arrears and will also tag on a 3-day Coach Education Course in Montréal where we have 20 fantastic coaches lined up to learn the Swim Smooth way.
Coaches Sally, Derek and Ross will take the reigns again whilst I deliver the course at the wonderful Stade Olympique which hosted the 1976 Olympic Games - wow!

The July / September 10 week challenge project - going backwards to go forwards! Starts week beginning Monday 23rd July
No doubt many of you with young families like ourselves will be taking a week or so away over the school holidays, which got me pondering recently:
"What's the best way to regain motivation during the colder months upon your return without the stress of thinking it's a hopeless cause?"
Your dedication over the summer months especially is unparalleled. It never ceases to amaze me how habitual most of you are about your exercise routine, which is great! Sometimes though, we can fall off the perch, and if that's going to happen, now's the time it will. We hear the alarm, but roll over and hit snooze instead. We've all done it! 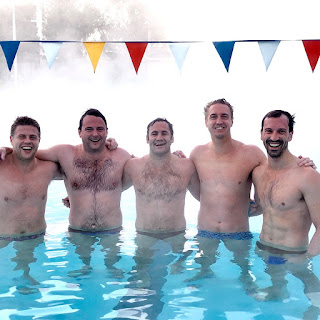 The 630am Lane 4 boys feeling virtuous after a CSS Session at 3ºC air temperature!
The number of people who comment to me "yeah but that's what is great about the new app booking system for you - you still get paid even if we don't show up!" to which I honestly reply, "trust me, I'd much prefer a pool full of people extending themselves and enjoying the water 365 days of the year than having empty lanes!"
But what if you do take time off for the holidays? There's then nothing worse than feeling like you can't start back, fearful that your swim buddies have moved on your absence, but fear not!!! I have a great challenge to put to you which is going to see us all…
(project) going backwards in order to go forwards!
We've all heard the phrase, "you have to go slow in order to go fast" but this July, August and throughout September, I have a cunning plan for all of you to see if this is actually true!
Many of history's greatest leaders, innovators and powerhouses of thought knew the importance of going slow. The founder of the Roman Empire, Augustus, used the Latin phrase "Festina Lente" which translates to "make haste, slowly." It served as a reminder to Augustus and his followers to perform activities with the perfect balance of urgency and diligence. Let's put some of that into our training following the school holidays and give you a clear pathway to the start of the summer season without being overly stressful, but still just challenging enough to motivate you to achieve something worthy of a Roman Emperor! Sweet Uncertainty we call it and wrote about the motivating effects of that way back in 2012 here.
Now, before we go on, please take 2 minutes to watch this video clip about the difference between MOTIVATION and COMMITMENT - we need a spark to get you going, but habit and routine is what will keep you going and that's where this plan comes in…just like brushing your teeth, exercise should be a non-negotiable, year-round: 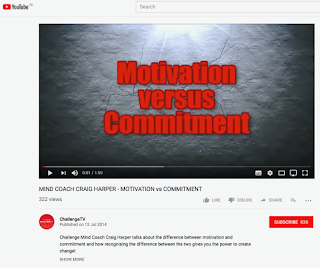 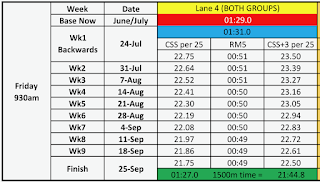 I promise it'll be a lot of fun with a shared vision of us all starting from a manageable base to prepare ourselves for a great summer ahead! The final green time gives an indication of where I reckon you'll be by the 25th September if you manage to stick to the process (and are diligent with your attendance also!). Pretty exciting, following a simple bit of structure which I believe you can achieve on a minimum of 2-3 sessions per week.
And for those of you who already feel like you're in a good place, fear not:
But even then, this will still be a challenge, so I'll leave you with these sage words from Craig Harper (the guy in the video above) and please excuse the brief profanity in the first line - I'm sure we can heed these words in many aspects of our lives, not just swimming with the squad: 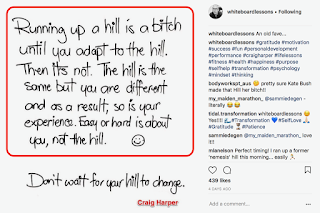