Newsflash: we have some permanent places available in the following sessions - please email swimsmooth@me.com if you want one: 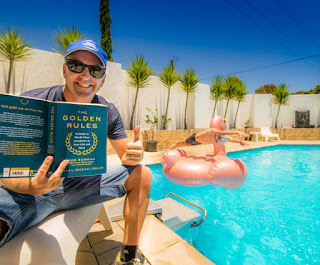 The Golden Rules by Bob Bowman (Michael Phelps coach) an excellent read - get it here (Jackson, 8, performing his best Phelps dive over a flamingo…of course!)
Dear Swimmers
I hope you've all had a great (hot) weekend and are "enjoying" the miserable (wet) start to the week!
I had an interesting conversation with a squad swimmer this morning (whom shall remain anonymous 😉) who really confirmed some of the thoughts and rumination within a great book I've just finished reading by Bob Bowman, coach to 23-time Olympic Gold Medallist, Michael Phelps. The swimmer in question was keen to let me know about some of their lofty goals for the next couple of years from a health and competition perspective, claiming that if they did so at least it would then be "out of the bag" and that simply by letting one person know (and the Universe...) they'd be somewhat more motivated to pursue the challenges they had set themselves. I couldn't agree more - accountability is a powerful thing!
Ironically enough, only last month I decided to follow Bowman's sage (but simple) advice to turn back the clock and start to document not only my goals and aspirations for what is now my 40th year, but also the training plan that would get me there. This is probably not new to some of you who keep online records through your Garmin's, Strava, Training Peaks and the like, but in the same manner as Bowman, I have decided to go a little "rustic" and to start keeping a simple hardcopy training diary to plot my exploits; and you know what? It's really working out well!
With this simple method of planning things out, recording how I feel, projecting what I should do next, I feel accountable for the first time in a good number of years. It feels great. Given the rather crappy 2017 I had where stress from various online matters of plagiarism and significant copyright infringements took precedence over my own health, I'm determined to prioritise my health and well being in 2018 and hope you will also join me in that quest for yourselves if you're feeling like you need to crank things up a bit again?
Let us know what you're up to in 2018...
So what training / racing / wellbeing plans do you have for this year? Have you written them down yet? Have you told anyone? Don't be shy - flick me through an email as I'd love to hear what you're up to this year?!
Of course many of you are not far away now from the Rottnest or Port-2-Pub swims and then later still the Busselton Half Ironman and beyond. You might be feeling like you're right in the thick of the "grind" right now, and whilst I wouldn't ever dissuade you of varying things up a bit to maintain the interest in what you're doing, the over-riding message from Bowman's book was how he rates Phelp's consistency and stoicism as the key attributes as to why he was so successful. And if it makes you feel any better at all, have a little laugh to yourself the next time you're feeling a little hard pressed during the grind of a hard Red Mist or CSS session by reading the comments in one of my Instagram posts below - imagine ONLY swimming Red Mist Sessions FIVE TIMES PER WEEK for 12-14 weeks: 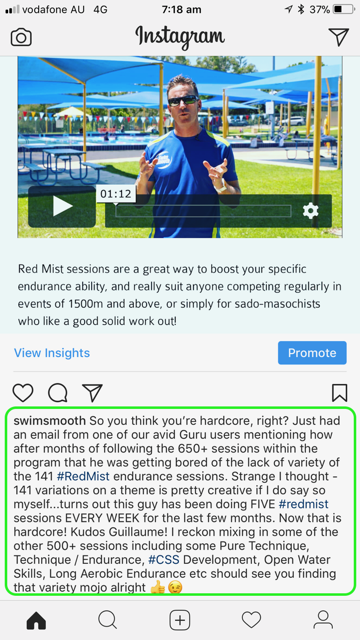 It pays to read the instructions - imagine the motivation required to do 60+ Red Mist Sessions in a row without any other training to balance things out?!
What I'm up to in 2018:
As mentioned, I will be turning 40 in September this year, and in true midlife crisis fashion and given the rather rubbish 2017 I had, this year I'm setting myself some lofty goals.
On March 10 I will be partnering up with Brad Smith (12yrs my junior) and Rottnest Solo 2nd, 3rd and 4th place finisher as well as reigning recorder holder for the Port-2-Pub 25km swim to do the 2nd www.rottnestswimrun.com where I placed 4th last year with another Brad (Hosking). Brad Smith might be seen as a pure swimmer, but we've been training back on the bike and run together for the last 6 months or so and I have to say he's a bit of a weapon in both those two disciplines as well. Brad is a great training partner and someone I really admire as an athlete too, so let's see what we can do this year.
As if 42km wasn't enough of a SwimRun around Rottnest Island, following on from this I'm hoping to qualify for the World Championships in Sweden in September (birthday weekend and all…) and put myself through the following 10km of open water swimming and 65km of hardcore trail running as brilliantly depicted in this video below: 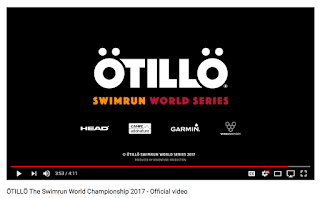 Watch the crazy 4 minute video from 2017's event in Sweden here
Mates reunited…
But here's the best part, my best mate from my University days / British triathlon team and partner in crime (as you'll aptly discover in the photos below), Andy Blow, will be my partner (injuries, wellness and qualification permitting) for the event. It's fair to say that Andy has kept himself in WAAAAYYYYYY better shape than I have in the ensuing 17 years since we each graduated with a bachelors in Sport & Exercise Science, so again, I'll be playing 2nd fiddle and hoping to not let anyone down! Andy has already finished Top-10 in the World Championships in Sweden with another of our former uni mates, so the challenge will be really on!
Here's some fun photos for you to laugh at and me to cringe over on this wet Monday afternoon (all in the name of you thinking similarly about how you might wind back the wellness clock this year you see 😉) - you can probably see why we had the nickname "Tweedle Dee and Tweedle Dum": 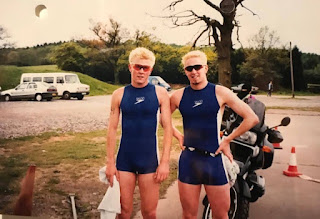 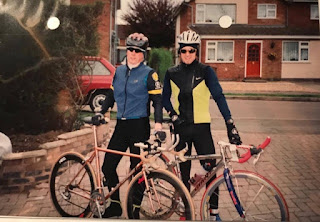 Embarrassing triathlon outfit photo # 2 (circa 1998) - I was so proud to be riding for Giant that year after having posted out >150 sponsorship applications and only hearing back from Giant! - Andy (L), Paul (R) 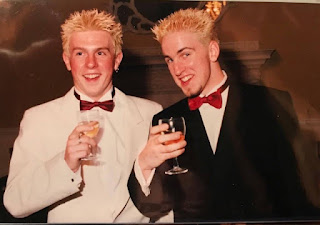 Celebrating at the "Blues Award Night" - the only two triathletes to have ever received a "Full Blue" for international triathlon representation (circa 2000)
How to crank the wheels into motion…
If you get chance to read Bob Bowman's book I'd really recommend it. He's very much of the belief that a plan is not a plan unless it's written down. So here's mine, detailed with the hope that some of you might even consider joining me on some of my sessions.
What does your plan look like? Have you written it down? Here's mine...
For me, getting creative as to when I do these sessions around work and family commitments is key (nothing new there to some of you), but here's the kicker for me and something you might want to ponder over yourself too…
I'm going to (try to) be satisfied with 80%…
I find it's so easy at the start of a program to be gung-ho but find that you're injured or sick when you really wish you were still cranking along. This concept of being satisfied with 80% is nothing fancy, in fact I read somewhere that a small community in Japan (Okinawa) which contains some of the oldest living people in the world, attribute their longevity to this life of moderation, especially with respect to not over-eating, its called Hara hachi bun me: 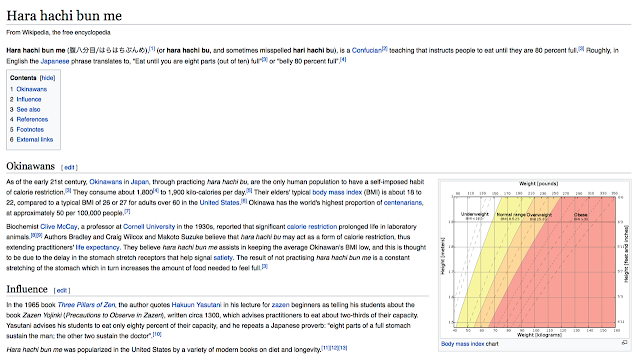 I've always been a 110% kind of a guy (and yet ironically tend to have much more sensibilities towards my athletes commitments, ailments and goals), so this year I'm going to aim to embrace some of the above and see what happens.
Would you benefit from this too perhaps? Not just in training, but in other aspects of your life?
Zwifting - the future of efficient practice and time constrained athletes:
As much as I'd love to push out my chest and say "yeah, I can run 65km trail for the ötillö no problem", this is definitely not the case. I haven't even run a marathon despite having swum many! To this end, for the last six months I've been back on my bike long before I started taking my first few running steps again. The idea has been to build up a little core stability in a non-impactful way and to simply get my lower body moving again properly. It's not been easy - I'm as stiff as a board these days it seems (hence the yoga on a Friday!). I overheard a few of you talking about this www.zwift.com thing and was lucky enough to then have Sean Webb lone me his Kickr to give it a try.
If you have absolutely no idea what I'm talking about, Zwift is basically something that allows you to ride stationary in your tin shed when it's 40ºC outside, sweat buckets and move absolutely nowhere. Sound inspiring right? Well it's enough for over 400,000 people around the world to sign up apparently. You hook your "smart" wind trainer (mine is a Tacx Neo Smart for reference) up to a screen via your iPhone and you pedal away like mad training and racing with people right around the world, all represented as computer animated avatars. Still not flicking your switch? As you race around the streets of London, Richmond USA or the virtual world of Watopia in gloriously defined gaming graphics, you and all your buddies (wherever they are in the world) can be on there too! I can now hop on with John in San Diego (5am), Adam in Cambridge (midday) and me in Perth (8pm) and we can all ride around these courses, all experiencing the same gradients which transmit and control your smart trainer accordingly and even chat as though we would on a normal ride right in the "comfort" (and safety!) of our respective tin sheds. Maybe I'm just an "anorak" but the experience is amazing - 45 to 60 mins of quality "no soft pedalling" training easily being worth 1.5hrs on the road. What's more, it cranks your competitive juices as well (something that totally gets me motivated) - I just need to be careful about heeding my own 80% rule advice!
For more, watch this 1m20s video - I think you'll see why I'm hooked: 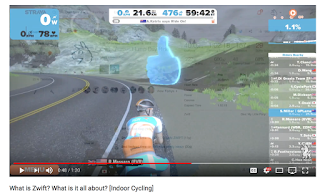 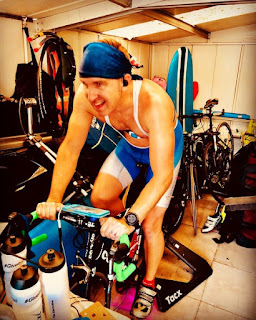 Back on the bike in my sweat shack pain cave using the very brilliant www.zwift.com riding application 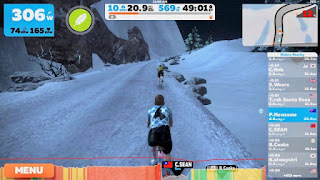 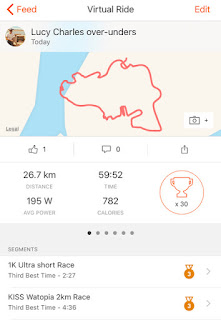 www.zwift.com is great - you can ride with your mates all around the world - this was a short sprints 60 mins workout at 3am Perth time with 2nd place Kona Ironman, Lucy Charles (and about 150 other riders all simultaneously doing the same session! It was very cool!) 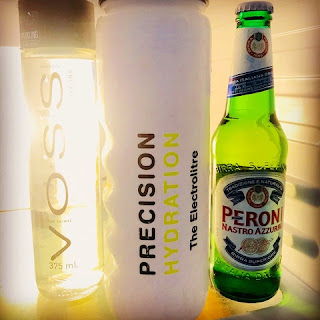 Getting prepped the right way and ready for a reward - Andy's company www.precisionhydration.com is the key nutrition sponsor for the ötillö race series in 2017/2018
Moving on…
So take 15-30 minutes for yourself this week, jot down what some of your hopes and aspirations for 2018 are and (if it helps) flick them across to me via email - I'd love to hear what challenges you are taking on, in or out of the pool! 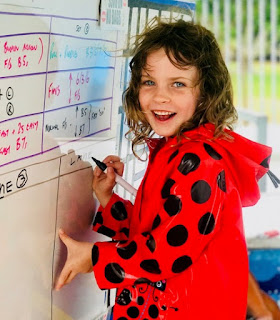 Getting some help down at the squad sessions with my budding 6yo coach who'll no doubt be helping you all out in let's say….ehhhh, 10-12 years time?! 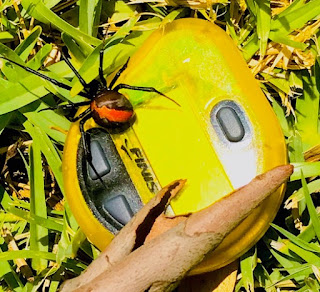