Inspired by the Rottnest SwimRun event, this week we go "Old Skool"! 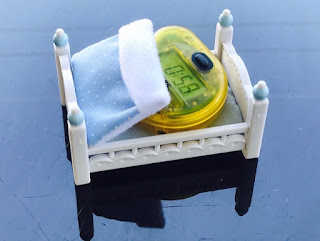 This week we'll be winding back the clocks and getting a little "Old Skool" with our squad sessions by putting the Tempo Trainers to bed for a little variety...
Dear Swimmers
In today's blog update you'll be getting two updates in one - whoop! This week's training and this last weekend's inaugural Rottnest SwimRun event - let's start off with this week.
Going Old Skool
As promised over the last couple of weeks, this week we'll be going a little "old skool" in all the squad sessions and replacing some of our current drills with some classics, asking you to bring in a t-shirt for some resistance training, mixing in a few short sections of different strokes (all optional of course!), spicing things up with a little bit of speed work, and giving the Tempo Trainers a little rest too! Why you ask? Primarily for a little fun and variety now that the two major Rottnest swims are over and to add in a light-hearted week for those of you doing the Busselton 70.3 event where I am sure your biking and running is pinging along quite heavily at the moment (cue the tired, grumpy face).
As the 7am and 9.30am crew found this morning, winding back the clock with some classic drills can provide quite a bit of insight into how to improve your efficiency, and equally to see exactly how and why certain drills have developed over the years and some have been confined to the annals of history. Here was this morning's session in case you missed it: 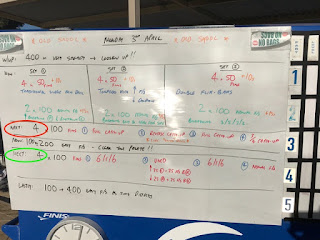 Whilst we speak about how drills such as "Catch Up" (essentially over-gliding) can be detrimental for your swimming, the swimmers this morning experienced this first-hand and realised how much increased effort was required to shift themselves through the imprinted dead-spot at the front of the stroke. This section of the session is highlighted above in RED. Equally then, demonstrating the similarity of drills like 6/1/6 and Unco (highlighted in GREEN above) to Catch Up and Reverse Catch Up, allowed the swimmers to see how these drills had evolved over time to give a much better chance to acquire beneficial skills that wouldn't be holding them back. Sounds simple? It was, and sometimes even just doing something purposefully wrong can be very revealing when you know how and why to do it right.
So all the squad sessions this week will have a little bit of an "Old Skool" feel about them. I've now been swim coaching myself for 20 years (eeek!) so please come and try some of these exercises for a little fun and variety. Don't forget to bring a t-shirt and equally there will be a prize at the end of the week for the most retro looking outfit(s)!
Rottnest SwimRun:
As you may recall, last June I travelled over to the Scilly Isles off the southwest coast of England to participate in the inaugural British ÖtillÖ SwimRun event - an event which saw me covering 42km with a partner comprised of 10km of ocean swimming in 13ºC and 32km of very rugged off-road trail running. It's a crazy event but one which is gaining a lot of international traction. You can read more about that race here:
http://swimsmoothperth.blogspot.com.au/2016/06/on-saturday-18th-june-2016-i-had.html
…fast forward to 2017 and low and behold but several of the Tuesday / Friday 6.30am squad swimmers had decided and planned for over 12 months to bring the same race concept over here to Western Australia on the beautiful Rottnest Island.
Competitors had to complete the following course:

Which comprised 28.3km of mostly beach / rock running and 4.4km of ocean swimming, all with a partner of your choosing:

Wearing a range of garbs like this (anything goes so long as you run and swim in your running shoes and carry everything with you all day): 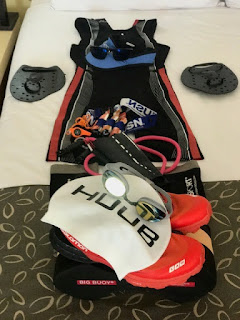 …and looking about this silly: 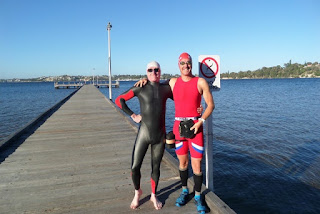 Ironically the guy who got me into triathlon some 22 years ago (Garrie Prosser, left) was visiting us on holiday for the event - the perfect mentor to have alongside!
For my sins, I had opted to go with veritable powerhouse / Terminator, Brad Hosking as my partner who has competed at no less than 3 Hawaii Ironman World Championship events finishing way up the roster. We've both recently found a "happy place" in terms of recognising that family and work commitments may perhaps have taken the edge off our competitive yearnings, however, that was until the gun went off and we found ourselves entering the first swim in 6th position out of 48 duos and then popping up in 2nd position after the first swim! The game was on and the fire in the belly was back for both of us almost as quickly as we'd agreed that we'd just be taking a weekend "stroll" around the island! 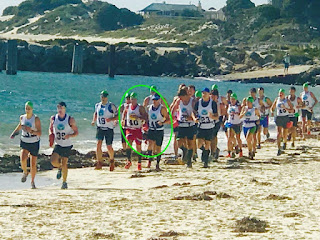 Off to a steady start in 6th position - the competitive fire was still burning brightly just 20 minutes after this race-start shot!
We decided to keep a "lid on it" and just to pace things out. Having Brad's endurance sport experience literally tethered to me was perfect and prevented the temptation to cook things too early on: 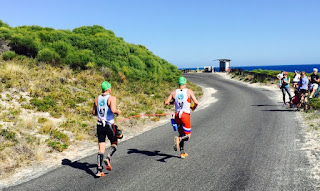 By the time we got halfway around the island (West End) we were making good ground and posted the fastest section of all the teams on the course at this point. That being said, eventual winners (and Wednesday 5.30am squad stalwarts Emily Loughnan and Gary Couanis) were looking very comfortable just ahead of us by 1m20s at this stage and making it all look very easy indeed! 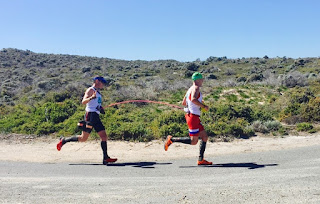 As much as I tried, Brad's fast pace prevented me sneaking out any real smiles on the day - it was "game face" all the way! 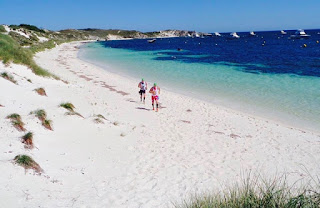 Constantly getting out of the water, soaking wet and running up soft sand proved quite tedious very quickly! But check out those views! 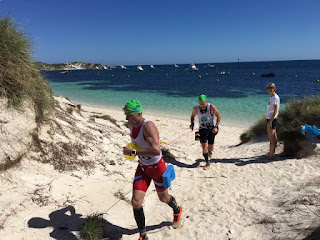 One man pulling, one man being towed like an unwilling hound - guess who is who?!
And then it all went a bit pear-shaped. After some 2-2.5 hours of racing I momentarily lost concentration on one of the rockier sections whilst trying to put on a small visor to protect against the heat. I came crashing down in what seemed like slow-motion and landed on my left knee giving it a good knock and a bit of a gash. In my haste to get up and keep going and not lose too much ground, we believe we probably missed a key marker point on the course as the next thing we knew we were peering over the edge of a very steep cliff at the crashing waves below. We retraced our steps and found ourselves popping out at Energy Station number 5 or 6 by climbing over a barrier, only to the dismay of seeing 3 other teams had effectively caught us up. Argh!!! All that hard work had suddenly disappeared in a heart beat. We skipped the energy station for want of trying to peg back some time, but the damage had been done and suddenly the prospect of finishing 2nd overall seemed lost: 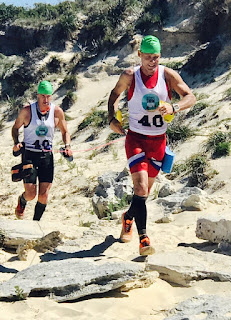 All smiles and form for Brad, all grimaces and soul searching for me!
Missing the energy station and a chance to refuel was a school boy error and sadly this is where things began to rapidly unwind for yours truly: 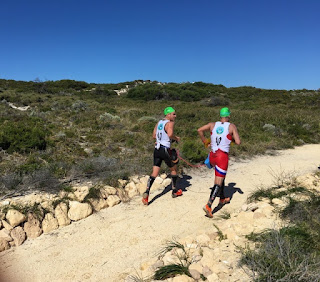 Brad the Machine giving me a pep-talk as we tried to catch 3rd place which would have seen us finish 1st male team - sadly my legs had other ideas and so too did the other team who ratcheted it up another notch!
I did plenty of soul searching in that last hour of the race and was faced with the prospect of the 2nd female team catching us on the final leg into the finish. Goodness knows where I got the energy from for the final 793m swim to the Army Jetty, but immediately across the line I collapsed in a heap, gripping my knee and feeling very woozy indeed! Brad looked as fresh as a daisy of course! 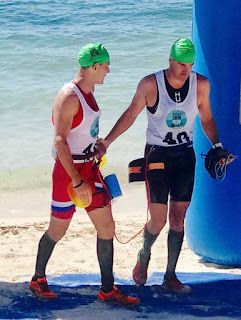 Massive credit to Gary Couanis and Emily Loughnan for winning the day in fine form! They made a brilliant team which is what this event is all about. Full results can be seen here: http://bluechipresults.com.au/results.aspx?CId=11&RId=983 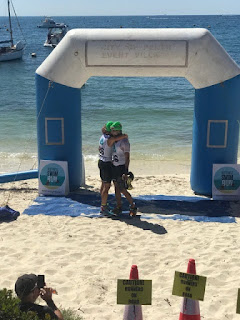 Emily and Gary: a deserved winning couple for the inaugural Rottnest SwimRun 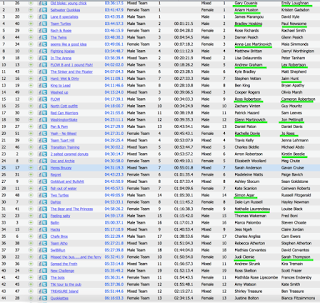 20 people whom have (relatively) recently trained with the Swim Smooth Perth squad completed the event - well done you and everyone else - what an event to be part of in it's first year!
Brilliant organisation by the Rottnest SwimRun team led to a safe and fun event for all the participants in which everyone managed to get around the gruelling course - give it a blast next year! 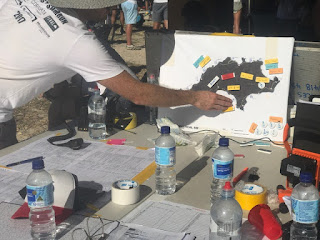 A lot of people have asked me which was harder? Rottnest or the Scilly Isles. Despite the Scilling Isles being almost 3 hours longer and much, much colder in the water, the intensity of racing with a brilliant athlete in Brad and the sheer distance spent navigating soft sand and rugged rocks under the blazing heat, meant to me at least this was a much tougher course. Still, despite our initial disappointment of how the race went a bit pear-shaped for us in the final hour or so and despite all my whinging about my knee after the fall, this final photo says it all - I loved it, even if you didn't see a smile on my face during the race itself! 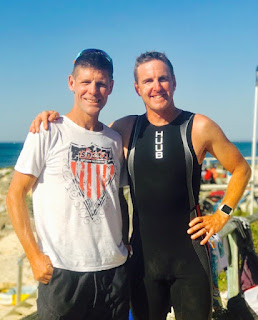