"Once I'm a little bit fitter…"

Once I'm a little bit fitter, then I'll be ready to do a full swim session by myself...

Once I'm a little bit fitter, then I'll be ready to come back to a squad session...

Once I'm a little bit fitter, then I'll be ready to think about doing a race...

Once I'm a little bit fitter, then I'll be ready to set some new goals...

...the trouble is, when are we ever as fit as we'd like to be? Probably never.

At this time of year many of us go through the process of thinking about doing something to improve ourselves (in or out of the water), when in reality that over-thinking can often lead to procrastination and never feeling like you're fully ready to start your new task (whatever it might be). As such, this delaying strategy often leads to further frustration and a feeling that we've failed by never even starting. It doesn't have to be this way.

Personally I'm a classic for this when it comes to thinking about doing some useful work (i.e. planning, accounts etc). I can spend hours preparing to do these tasks only to realise that what I was really doing was simply putting the true tasks off rather than simply turning the brain off, starting the task and getting on with it.

I've been overwhelmed with emails recently from people saying that they're 'scared' to get back into things for fear of not being able to 'keep up' or excel as well as they would hope. We've personally just had a lovely holiday down south in Esperance but sadly with not a single ounce of exercise of any description! Mish is preparing for a Duo swim and I proposed the prospect of us doing some swimming together over the next few weeks to motivate us both to get back into shape. I have just started a group on a Tuesday and Thursday at 12pm with some of WA's most aspiring athletes and suggested that she comes and join us - the initial reaction? "Once I'm a little bit fitter..."

This is not just a 'Mish thing' - this response is quite natural in all of us - it's the fear of letting ourselves down or not performing as we would think that others would expect of us. The truth is, this is never an issue. I absolutely guarantee that whilst you might not be Michael Phelps when you return to the pool, it really won't be as bad as you're telling yourself it might be. Don't believe me? Have a read through of my "Six Sessions Kickstart" experience back in July 2010 at: http://swimsmoothperth.blogspot.com/2010/07/are-you-scared-to-come-back-to-squad.html - this is what you can expect to go through when you return...and guess what, it's really not that bad, nor will you suffer insanely ;-) It's all in our minds.

What really spurred this post today? Well, short story, but when we arrived at the airport a week last Friday to fly down to Esperance, both myself and Michelle forgot to bring Jackson's 'yellow cow' comforter which he has had with him every day since he's been born (2y9m) and always cries for when he's upset. He also has a dummy which we've tried unsuccessfully to ween him off. This was potentially a MAJOR disaster and I actually felt sick at the potential ramifications for 'holiday bliss'!

However, we had no time to return to the house to get it, so our bed was made and we had to lie in it! I replaced the said cow with a stuffed dolphin which was a small reprieve for the little guy, taking the bad news firmly on the chin. The hotel we were staying in had a pool and even though you'd probably imagine that with water-loving parents like us, whilst Jackson likes being in the water, he always refuses to put his head under the water and absolutely hates getting his eyes wet. Just like with the call-to-action above about simply getting started though, we had to start somewhere with the little guy and having easy access to the pool on a daily basis really helped, as did a pair of goggles I bought him (which in the past he refused to wear). For whatever reason, one morning he 'suddenly' decided that he could put his head under the water and with that a whole new water baby emerged! As you'll see in the photos below, by the end of the holiday we couldn't get him out of the water and he's now doing all sorts of aquabatics and loving it! I'm a very proud Daddy! I think forgetting the yellow cow turned out to be a very good thing!

So if your 'yellow cow' is your doona or that good book that you've been reading over the holidays which you just don't want to give up, go right back to basics, be a child again without the inhibitions, turn the brain off and as the famous Nike slogan says: Just Do It!

All you've got to do is start and who knows where that'll then take you! 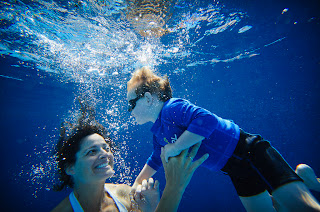 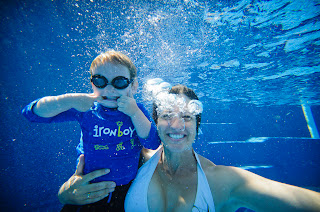 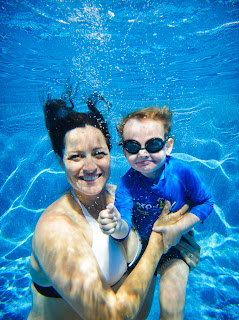 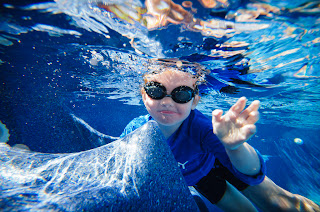 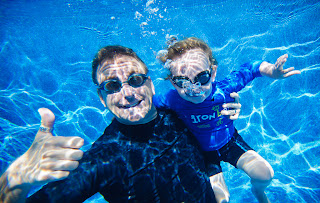 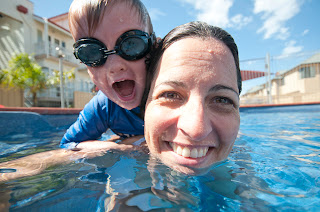 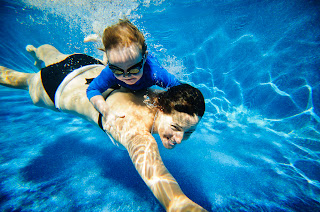 NEWSFLASH: Nicole Hodgson may have space for 4 team members for a Rotto swim this year - anyone keen to find out more should contact Nicole direct at nicole.hodgson@bigpond.com