St. John's, Ceinwen, Wayne and back on Friday!

Hope you're all doing well...I can guarantee that you've had better winter weather in Perth than we've had summer weather in Canada - it's been shocking!!! 10 degrees and super foggy and rainy for all but the first day that we were there!! Such a shame...as you'll see from the photos below, St. John's in Newfoundland is such a picturesque place that it's a shame we didn't see more of the vibrant colours whilst there: 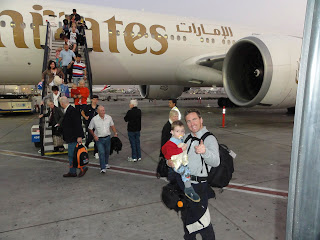 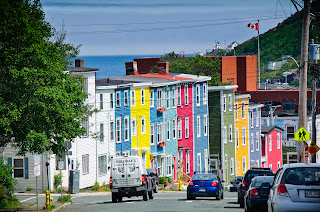 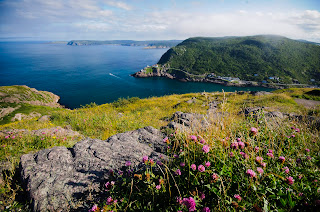 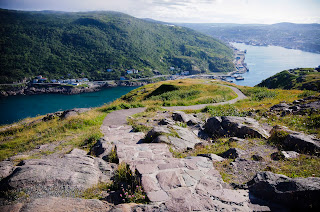 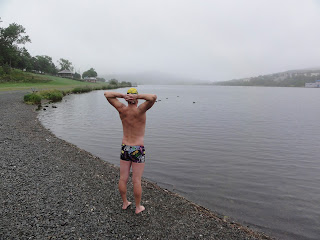 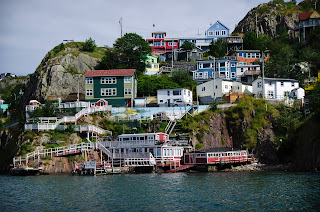 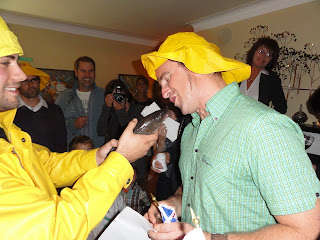 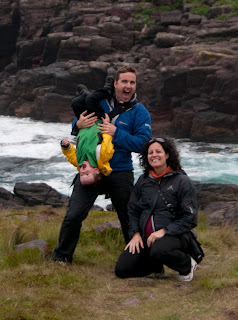 As you may recall me saying, I was over in Canada primarily to photograph my brother-in-law Kevin's wedding to his fiance Leah. This went really well, though I had to be extra creative with the photos given the dreadful weather that particular day.

The photo of me about to kiss a cod (!) of all things is part of an ancient rite of passage to become an honorary "Newfie" called "being Screeched in" - which essentially involves reciting some strange celtic passage, eating some local bread, knocking back some dark rum ("Screech") and then kissing a cod. It was a lot of fun it has to be said!!

Back in June 2010, two of the coaches who flew over for our 3 day Coaches Education course were from St. John's of all places, so when I told them I was heading over they invited me to their squad to run a half-day video analysis session last Sunday for their swimmers. This was a great experience and they were all very accommodating and proceeded to then pick me up every morning at 6am to go swimming for 2hrs at either the local "pond" (a small lake) or the 50m pool at the University. They even entered me for their local triathlon as a team swimmer and I managed to lead out the swim with a hefty lead over second place which was nice...they all thought I was mad though swimming in just my bathers as it was about 14 degrees! My appearance as a "crazy Aussie swimmer" made the local news too as another Aussie / Kiwi (Russel Crowe) was also in St. John's at the same time shooting a TV show - there was a lot of Aussie hype that's for sure! This was all really helpful though with me now being just 3.5 weeks away from my show-down with the English Channel.

Speaking of which, I know most of you were watching Ceinwen successfully complete her English Channel swim last Friday, but in case you missed it, here are the details:

Sadly, Wayne "The Train" Morris got pulled from the water during his Channel attempt on Tuesday. The weather had been looking dodgy in the lead-up to Wayne's swim, but when the opportunity came up to get a swim in, Wayne had to take it. Things were going very well indeed and he was smoking along for (we think) ~8hrs, but then the weather changed to a Gale Force 8 and 40 knot winds and all boats attempting the crossing had to abandon for the very real safety risk to Wayne and his entire support crew.

We're all very saddened to hear of Wayne's unfortunate experience, but please keep your fingers crossed and stay tuned to www.channeldare.com as there is a chance he might get chance to re-attempt the swim if the weather improves later this week. If anyone can do this swim, Wayne can, so let's all get behind the big guy and wish him the very best!!

Lastly, I'm just sat in the (business!) departure lounge at Toronto airport awaiting my (business class!) flight back to Perth. I've saved up a few frequent flier points so decided to treat myself to an upgrade and get a good night's sleep so that I can be bright-eyed and bushy tailed for you all upon my return to Perth! I'm like a kid at Christmas with the anticipation of flying business class on an A380! They even have free beer and food in the business lounge - awesome! I get back in on Friday evening and will be back on pool deck at 1pm on Saturday (please come along if you can!) and then back to normal from Monday at 7am.

I've missed you guys and can't wait to get back into the swing of things...at least for a couple of weeks before I then shoot off for my own stab at the English Channel. My hair's longer and my waist line is even wider (!) but I'm in good shape and keen to have a good crack at the swim.

I hope you've all enjoyed having the other coaches look after you in my absence and look forward to seeing how you're all swimming.