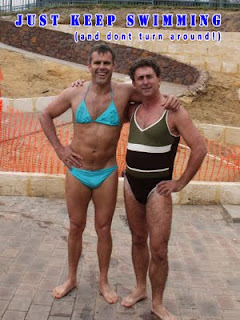 The format of the day was for the 8 teams of between 4 and 8 swimmers to a team to complete a total distance of 10KM in as fast a time as possible. All teams had to nominate an estimated finish time and there were awards for a) Fastest Overall; b) Best Dressed / Supported; and c) Closest to Estimated Time.

Taking out line honours were "Just Keep Swimming" in a total time of 2:12:26 which is a fantastic result, averaging well under 1:18s per 100m for 100 x 100m! They didn't have it all their own way though as team "Bar 120" led by Justin Palmer were off to a flying start in the first 1500m, eventually finishing 2nd in 2:17:00. In third place were this year's Best Dressed Team - the "Somerset Super Seals" led by gun water-polo player Karlee Canon. The girls were superbly dressed as super-heroes and finished in 2:25:34. Next in were the "Thorns and 2 Roses" made-up of Trevor, Stuart (the Roses) and Renee and Olivia (the Thorns!) who finished in 2:32:22 and were within 1:30 of their estimated time of 2:31:00 - nice pacing skills!

There was some hot rivalry between teams in 5th & 6th (the "Comodo Dragons" & the "Slappers) and also 7th & 8th (the "Snails" & the "Slugs"). The Dragons were the boys / husbands team and the Slappers were the girls / wives team. It was close between these two teams with the boys finishing just over 2:35:00 and the girls at just over 2:39:00 (awaiting confirmed results...!). The Snails and the Slugs fought it out literally within 2m of each other for the first 7km with the Slugs eventually pulling ahead and finishing 7th in exactly 2:50:00 with the Snails not too far behind in 2:54:00 and a good 5-mins quicker than they thought they'd be!

We've had some very interesting photos through from the day and these can be seen here: http://gallery.me.com/swimsmooth/100143

Thanks to Claremont Pool and their staff for hosting the event and to Adam, Nat and Victoria for the photos! Here's to next year!!!