Dear Swimmers
Saturday just gone marked a milestone in Rottnest Channel swimming history with the inaugural running of the Port-2-Pub event from Port Beach to Rottnest Island, a distance of just under 20km. It also symbolised the 60th anniversary of the very first Rottnest Channel Swim by Gerd von Dincklage-Schulenburg in 1956. A second event was also run over 25km, which was this year won by Brad Smith who you may recall from here recently finished 2nd overall at the Rottnest Channel Swim on 27th February. Brad averaged under 1:20/100m for the 25km swim finishing in a very handy 5h34m! Well done Brad, very proud of all that you have achieved this year and all that you will go on to achieve going forwards!
In total, 36 members of the Swim Smooth Perth Squad (and 1-2-1 swimmers that I coach separately) successfully navigated Gage Roads to make it across to Rottnest Island. The conditions were good despite earlier-in-the-week weather reports looking dire (it just goes to show that you can't lose precious energy worrying about what is out of your control!). Congratulations to all of you.
I'd like to make two special commendations here:
Caveats on results:
I'm always paranoid about missing out people's results inadvertently in these big events. Unfortunately there is no name data from the official results at http://bluechipresults.com.au/results.aspx?CId=11&RId=829 for the wet-suited swimmers and Cyndy Hetrick and Sally Scaffidi (our two brilliant evening squad coaches) teamed up for a 5h26m crossing under the guise "Rubber Ducks" in their rubber suits ahead of their 20km Lake Argyle swims in May - well done girls! Also, the Team of 6 information is missing the 6th person's name, so if I've missed you, I'm terribly sorry! Please let me know! I do know for a fact that Super Sue Oldham went 7h05m with her team on Saturday, which rounds off a great summer's swimming for one of the most inspirational ladies I've ever had the privilege of coaching. Nice job Sue, we're super proud of you!
Here are those results - well done everyone! It was a very well run event by Ceinwen Roberts, John Guilfoyle & Co and one which you might consider next year as part of your summer season training with the Swim Smooth Perth Squad!
Paul
P.S final shout-out to Andrew Hunt, app builder extraordinaire who produced https://itunes.apple.com/us/app/port-to-pub/id1090716092?ls=1&mt=8 for the event - the new marker bout overlays are way cool! Well done Andrew! 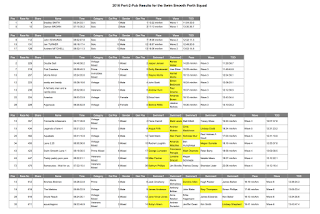