Well, I hope you've had a brilliant couple of weeks in my absence - if you didn't catch what I've been up to in the UK, you can read more about that here: http://www.feelforthewater.com/2014/03/photo-video-highlights-from-triathlon.html and a little more below, demonstrating what the last week or so has entailed.

Thanks to the coaches who've stood in for me - Sally, Sandy, Brad and Cyndy - you guys have been simply brilliant and I am so proud to have you as an integral part of the team!

Firstly though, I have a little bit of bad news I'm afraid. Just before I left for the UK we found out that Michelle's younger brother has been diagnosed with cancer and has immediately started a course of chemotherapy. My initial stay in the UK was going to be 5 weeks, but given this news we curtailed it to 2.5 weeks, with Adam and Annie stepping up for me for two more major presentations we were due to do next weekend. He's such a great guy and only 38 years old with two kids the same age as ours. It's really quite sad and confronting and understandably Mish wants to go home and visit him in Vancouver, Canada to show morale support and assist with his day-2-day care in the short-term. His diagnosis has improved a lot since we first found out about it (B-cell lymphoma), but even still Mish wants to of course do everything she can to support him at this tough time. She will be leaving for Canada late on Friday 28th March and arrive home early on Sunday 13th April.

This does have repercussions for you all in the squad as (given that we have no family support ourselves over here - just some bloody awesome friends though it has to be said!), I will be stepping back down again from the early morning squad sessions in order to take Jackson to school (5 days/wk) and Isla to daycare (2 days/wk - Monday & Wednesday) and simply be there for my family in this time of need. I do hope you will all understand - it's not a decision we've taken lightly given how I've already been away in the UK for other coaching purposes this month.

As such, I plan to be there for Monday & Wednesday 9.30am squad sessions (as per usual) and for the Friday 11th April 9.30am squad session - one of the other coaches (TBC) will take the Friday 4th April 9.30am session down at Cottesloe Beach as originally prescribed (and yes, thank god, we're nearly through the whole 25m/50m pool and beach shuffle on these sessions - thanks so much for your patience and support here, the coaches have told me you've done great considering!). I will be shifting all my 1-2-1 sessions to after the 9.30am squads and before school pick-up.

So for this 2 week period starting, Monday 31st March, we will have a similar coaching roster to what you've just experienced in my absence, with one full week (next week) entirely back to normal with me at the helm on each session. Clear as mud? I thought so! It feels a little like that myself!

The main point is that I hope you can support us in this period with your attendance and I do appreciate and recognise the fact that this brings with it a little bit of an unsettled period where I had originally promised consistency and stability. In 12 years of living and coaching in Perth I've been fortunate enough that even without any extended family here, I've never once had to make adjustments to my coaching schedule for anything out of the blue like this due in no small part to Mish's brilliance as a mother - but in this scenario my family has to come first and I will do everything I can possible to make that up for you once we're all back to normal following Easter. Sound OK?

Alright, so briefly then the last week and a bit in the UK went really well. We did another Triathlon Show in Manchester and again had two major presentations to deliver, some Endless Pool coaching sessions with Zoggs UK and also chance to meet and greet literally thousands of our Swim Smooth followers - it was great!

Then, just last weekend we were in Loughborough delivering one of our 3-day Coach Education Courses to 14 international coaches whom we had previously selected from over 100 suitably-qualified applicants for the course. On the final day we had 14 swimmers come in to join those 14 coaches which gave the coaches immediate hands-on experience of working with our methods and recognising how to use our Swim Types system to it's utmost best. I felt it was the best course we have ever delivered and to end on more of a cheery-note, here we all are "jazz-hands" at the ready (minus Arnar from Iceland who had to fly home early) - see you in 30 minutes down on pool deck! Friday 5.30am squad beckons (jet-lagged to the max!): 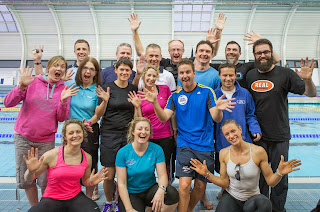