I hope all's going well for you over in Perth - just 3 days now until I step back on the plane and head back there to sunny old Perth (I think my 'moon' tan needs some work!).

Since I last wrote we've completed two 3-day Coach Education Courses - one in Stirling, Scotland and the other in Loughborough, England. They each had 12 coaches whom had travelled from as far afield as Israel, Germany, South Africa and Belgium to attend. These 3-day courses are a chance for coaches to learn our video analysis and stroke correction skills for use in their own coaching businesses or within their club environment. Given that the coaches all went through a selection / screening process and were selected from over 120 candidates from around the world, we were optimistic that we'd see some great coaching talent - and we certainly did, in droves! 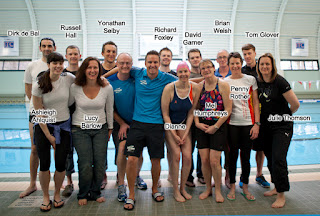 N.B notice how the pool backgrounds almost look identical - these two pools are carbon copies of each other, save for Stirling being a slightly narrower 6-lane 50m pool and Loughborough an 8-lane 50m pool. Both are brilliant facilities (for the UK!).

On the third day of each course we ran a full 1-day Swim Smooth Clinic where 12 swimmers joined us and the coaches had chance to then utilise their new skills by shadowing the work and direction that myself and Adam were delivering with their own 1-2-1 coach:swimmer. The coaches stated that they all really enjoyed this pragmatic experience. 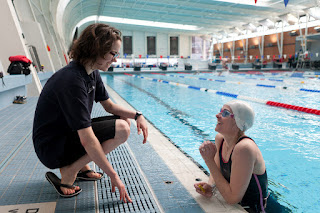 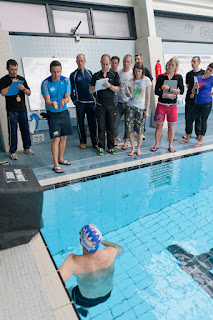 On the second day in Loughborough we were paid a surprise visit by legendary sports scientist Huub Toussaint (see: http://web.mac.com/htoussaint/SwimSite/Propelling_Efficiency.html ) who is part of our 3-way partnership in the new range of HUUB wetsuits. Having Huub on pool deck with us and seeing what we do and how we translate his (and other biomechanist's) groundbreaking research on propulsive efficiency into easily understandable coaching tidbits for the swimmers and coaches was truly great. Having studied this great man's work at university 12 years ago and to now be part of the same partnership that is bringing high-end sports science into the real world is something really special for me - I have to keep pinching myself! ;-) 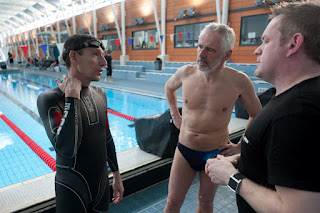 On day two of the Loughborough course we also invited Harry Wilshire, GB International Triathlete and Olympic hopeful to come and demonstrate his stroke for the coaches. Together with HUUB we are helping Harry with some financial assistance to be able to race in the events around the world that he needs to do to try and secure his chance of being selected for the British team. He's still got a long way to go though and then selection itself can go one of two ways depending upon how the British team decides to support their two young superstars, the Brownlee Brothers. Anything we can do to support Harry in this venture though will be beneficial hopefully and help keep this little sparkle of chance alive. Harry will be racing in Sydney all being well next weekend as one of those qualifiers.

Here's Harry testing the new HUUB wetsuit, immediately after swimming 100m very comfortably in under 58 seconds - not bad for a triathlete! 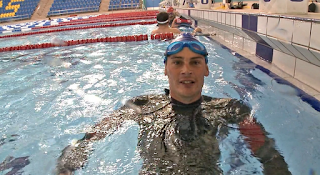 All smiles after a very quick 100m in the Archimedes 4:4 wetsuit

In between the coaches courses we've also run a 1-day swimmer's clinic in Edinburgh, had dinner with the founder of Finis Inc. (the company that makes most of the pool toys that we use in the squad) who flew in from California to meet us, observed the world's top 2 triathletes (the Brownlee Brothers) in action in Leeds, worked more on the book, and are just ramping up for two more 1-day clinics in Corby, England tomorrow and Wednesday before flying straight back to Perth on Thursday. I will literally be hitting the ground running at about 3am on Saturday and on pool deck by 10am Saturday - phew! Hopefully I'll get a nice easy day on Sunday with Mish and the kids before seeing you all down at the pool next week. 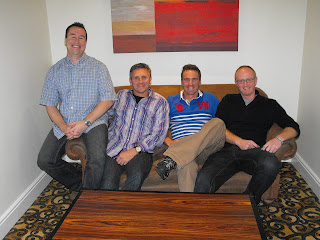